Not too long ago I came across a post by fellow Scrum Master, Josh Briggs, about a great experiment he conducted with his team: Keep Collaborating and Nobody Explodes. I’ve taken it and scaled it as a retrospective technique for use as remote or distributed team retrospective for 50 to 60 participants.

The Big Idea Behind this Distributed Team Retrospective

Teams often experience a breakdown in communication. Sometimes it will be around requirements, or expectations, or priorities.

The issue can be manifested by a lack of connection between Dev-Team members, or between the Dev-Team and the Product Owner. Or between Product and Design. Or any other role combination…

Other elements that contribute to difficulties in collaboration and delivery of value include component silos, and specialization.

All of the above can be particularly pronounced with virtual teams.

Important keys for solving for these problems include:

The following exercise, suitable for both a collocated as well as a distributed team retrospective, explores the impact of these elements. As a result, teams uncover ways to continuously improve their effectiveness at deliverying real business value. It’s also a whole lot of fun!

1) A really good video conferencing solution with break out rooms

Personally I like zoom.us. Zoom has greatVoIP and the ability to split people out into break out rooms (manually or automatically/randomly)

Using a tool like Zoom, the host can message all rooms,  can choose to split the participants into these separate sessions automatically or manually, and switch between sessions at any time, and more. It’s an awesome tool, especially for distributed team retrospectives. 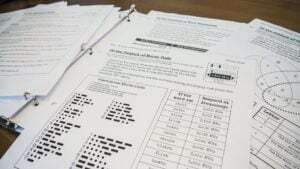 2) Licenses for Keep Talking and Nobody Explodes

Keep Talking and Nobody Explodes is puzzle game that is incredible at revealing how shared vocabulary, collaboration over specialization, and repetition makes for a high performing team. You’ll need one $15 license per group. Groups of 5 ± 2 work well. And you can get a bulk ten pack at a discount: $135 and use that for distributed teams.

Each group will be in their own break out room, sharing video/audio. 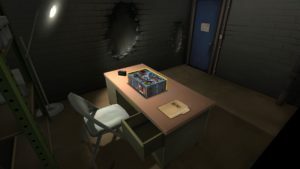 One teammate (the “Defuser”) will install the Keep Talking app on their local Windows or Mac laptop.  Once the game is running, the Defuser will be playing the role of a person trapped in a virtual room with a ticking time bomb that they must disarm.

The other players on the team, the “Experts,” are given a PDF bomb defusal manual. They must decipher information in order to give instructions on how to deactivate the bomb.

Oh, and the team has only have 5 minutes. And one mistake too many and things go boom!

Game play starts with a relatively simple bomb composed of three different modules. Each round will have a different set of modules. With each successful disarming, the team can advance to more complex devices.

With multiple groups playing, ask each group to give themselves a team name, and to keep track of a few key metrics.

After half a dozen rounds, about 30-45 minutes, the teams will have discovered quite a few things. Ask each team to pause 5 minutes and do a short brainstorming, noting what helped them solve the puzzles, as well as what hindered their success.

And then bring everyone together to share and discuss their learnings.

Typical items that bubble up are listed below.

Each of the retrospective items are easily connected to “the day job” scenario of software development teams: solving complex puzzles within a time-box.

Teams become aware of the value of the practices they use, or should be using: team agreements, definition of ready, grooming. Game play also exposes issues around dysfunctional styles of behavior and communication.

If you have more time, you can introduce other elements:

The latter helps explore the impact of persistent team membership versus feature teams.

And all of the above leads to higher levels of performance – what more can you ask for from a distributed team retrospective?

Take This Distributed Team Retrospective for a Spin

What do you say? Will you keep collaborating or will you explode? I look forward to hearing your experiences using this idea for either colocated or distributed team retrospectives.