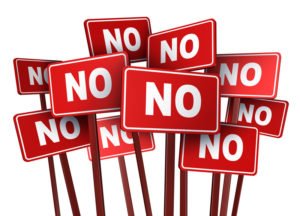 A post by Ken Robinson on FrontRowAgile reminded me how powerful “No” can be.

Deeper Dive: Saying No at Work

Separate The Decision From The Relationship

When people ask us to do something, we can confuse the request with our relationship with them. Sometimes the two seem so interconnected, we forget that denying the request is not the same as denying the person. Only once we separate the decision from the relationship can we make a clear decision and then separately find both the courage and the compassion to communicate it.

There are a variety of ways of refusing someone clearly and politely without actually using the word no.

As anyone who has ever been on the receiving end of a vague or noncommittal “yes” situation knows, a clear “I am going to pass on this” is far better than not getting back to someone or stringing them along with some noncommittal answer like “I will try to make this work” or “I might be able to” when you know you can’t. Being vague is not the same as being graceful, and delaying the eventual “no” will only make it that much harder— and the recipient that much more resentful. (See: Say, Mean, Do: The Language of Commitment)

Focus On The Trade-Off

The more we think about what we are giving up when we say “yes” to someone, the easier it is to say “no.” If we have no clear sense of the opportunity cost— in other words, the value of what we are giving up— then it is especially easy to fall into the nonessential trap of telling ourselves we can get it all done. We can’t. A graceful “no” grows out of a clear but unstated calculation of the trade-off.

The reality is that you won’t need to say “no” just occasionally. To consistently say “no” with grace, then, it helps to have a variety of responses to call upon. Below are a few responses you can put in your “no” repertoire. (Do you have more? Share, please….)

Sometimes the right (or at least initial) response to a request for action now is No. - It's far easier to say yes later on... Click To Tweet

Be a No-sayer, not a Naysayer

You can be a no-sayer without automatically becoming a naysayer.

Being a no-sayer does not make one a naysayer. For those who tend to be optimistic, understanding the difference is crucial. By definition, a naysayer is someone who habitually refuses, denies, or opposes. Naysayers have a negative attitude and see only why ideas won’t work. They are possibly extinguishers instead of possibility thinkers. Naysayers are good at grousing, grumbling, and complaining. Because of this, they are often tiresome and unpleasant to be around.

The negative nature of naysaying drives many to the opposite extreme. Instead of using no wisely, many become yes-sayers because they are afraid they will turn into naysayers if they don’t.

Naysayers are often unhappy and make it their goal, consciously or subconsciously, to make sure others are unhappy to. We’ all felt the impact of naysaying at some point in our lives and want to avoid negatively influencing others in the way we’ve been affected. Avoiding the trap requires understanding the difference between on-sayers and naysayers. Here’s a side by side comparison

I assume that you’d rather be a no-sayer than a naysayer, but the truth is many of us have qualities of both – sometimes at the same time! It’s possible to see why an idea won’t work while also spotting a glimmer of possibility. You can grouse and complain while you’re also weighing and prioritizing. It is not possible, however, to simultaneously harbor the countenance of both a no-sayer and a naysayer. One is content while the other is not. These feelings are mutually exclusive; they can’t reside side by side in your soul. Because of this a decision must be made. Do you prefer the life of a no-sayer or a naysayer? Naysaying comes naturally to many people. No-saying does not. The latter requires that we develop new ways of thinking and reacting to requests for our time. Specifically, no sayers:

No matter how difficult to say or hear, the truth is the kindest thing we can give each other.

Below is the classic video by Henrik Kniberg where he explores the role of the Product Owner. In it, he makes the point that the most important word that a PO can use is “No.” Sure it can be tempting to say “Yes” to every request, to pretend that things are always feasible or easy. But a “No” is important: “No” implies that trade-off decisions need to be made on the part of the customer or the organization’s leadership. One powerful word leads to thinking, discussion, and decision-making.

“No” is a very powerful word in the context teams. For example:

There are many ways to say “No,” and we need to find the most useful way to do that. We as development teams and Product Owners need to use the information that we have. We need to have valuable conversations about what is possible and what is not. And we need to use that information effectively to address the fears and concerns of the business and our customers.

“No” is a very final statement, finding useful ways to say, not right now or is this the most valuable thing we should be doing is a more effective way of having this conversation.

Have the “Right” Conversations

From Velocity Partners “Is NO the Right Response from Agile Teams?“

“No” is important, it is also very final. It implies that you can’t have whatever it is that you want. That is not an answer that Product Owners and Teams, trying to keep customers and stakeholders happy can go back with too frequently…

Sure, at times you might have to (or need to) say a clear, certain, and close-ended “No.” However, it should be a rare exception. (For that matter, a quick and thoughtless “Yes” is rarely a good response.)

Maybe we should be less binary. What if we are having conversations that include:

No matter where you are if you want to start building a new habit, there are four steps: