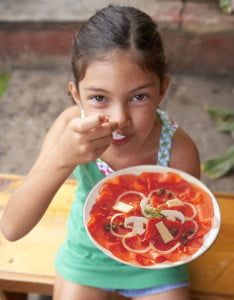 There are a number of great scrum learning games “out there” and this one was developed by Alistair Cockburn. It is a classic that’s great for Shu level teams. I’ve taken a few liberties, inspected and adapted, and offer up my own recipe.

After he named the exercise, he later realized that he got the language is backwards:

We are not starting with an elephant and deconstructing it into slices. Having a pile of elephant slices does not produce an elephant.

We are actually going in the other direction: starting from nothing and constructing the elephant. First an armature, then a walking skeleton, then a semblance of a moving elephant, and so on.

So maybe Elephant Lamination would have been more accurate… not slicing. But alas Elephant Carpaccio was so much more catchy a name…so it stuck

There’s quite a lot of power tucked into the simplicity of user/action/goal. Also, a user story typically spans multiple architectural layers: UI, client, and a backend. Take a deeper dive into user stories via this post: What Makes for a Good Agile User Story?


How Big Should User Stories Be?

“It depends”….An iteration could be anywhere from a week to a month depending on your sprint length. Really big stories are typically called epics – which might then span more than one iteration.  I coach my teams to try to keep stories down in size to a couple of days from start to “Done”. The Elephant Carpaccio game takes things a bit further and goes to minutes… while we still keeping the stories vertical.

Why Split Stories as Small as Possible? 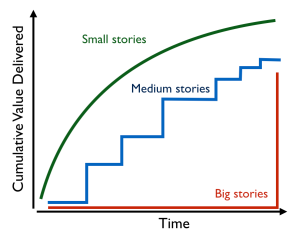 Conceptually there are a lot of benefits to thin slicing:

And all of this leads to happier stakeholders, happier users, and higher customer satisfaction.

My slide deck, with facilitator notes (and my special surprise ingredients) is available for download:

All I ask if you use my preso, when you make improvements, you share ’em…