It’s amazing we get anything right.

When surveyed, 80% of software developers reported they believed their skills were above average. Overestimating one’s desirable qualities (and underestimating undesirable qualities) relative to other people is known as the Illusory Superiority Bias, aka the Lake Wobegon effect, one of many cognitive biases.

What exactly is a cognitive bias? Wikipedia says:

A cognitive bias refers to the systematic pattern of deviation from norm or rationality in judgment, whereby inferences about other people and situations may be drawn in an illogical fashion. Individuals create their own “subjective social reality” from their perception of the input. An individual’s construction of social reality, not the objective input, may dictate their behavior in the social world. Thus, cognitive biases may sometimes lead to perceptual distortion, inaccurate judgment, illogical interpretation, or what is broadly called irrationality.

Cognitive biases have been shown in a wide range of species including rats, dogs, rhesus macaques, sheep, chicks, starlings, honeybees, and one that interests me the most: humans.

Where do cognitive biases come from?

Biases affect beliefs, decisions, and behavior in general and arise from various processes that are sometimes difficult to distinguish. These include:

How many cognitive biases are there?

There are so freakin’ many (~188) that a very kind person has helped by organizing them into four categories:

Biases that arise from:

And here they all are in a nice neat codex: 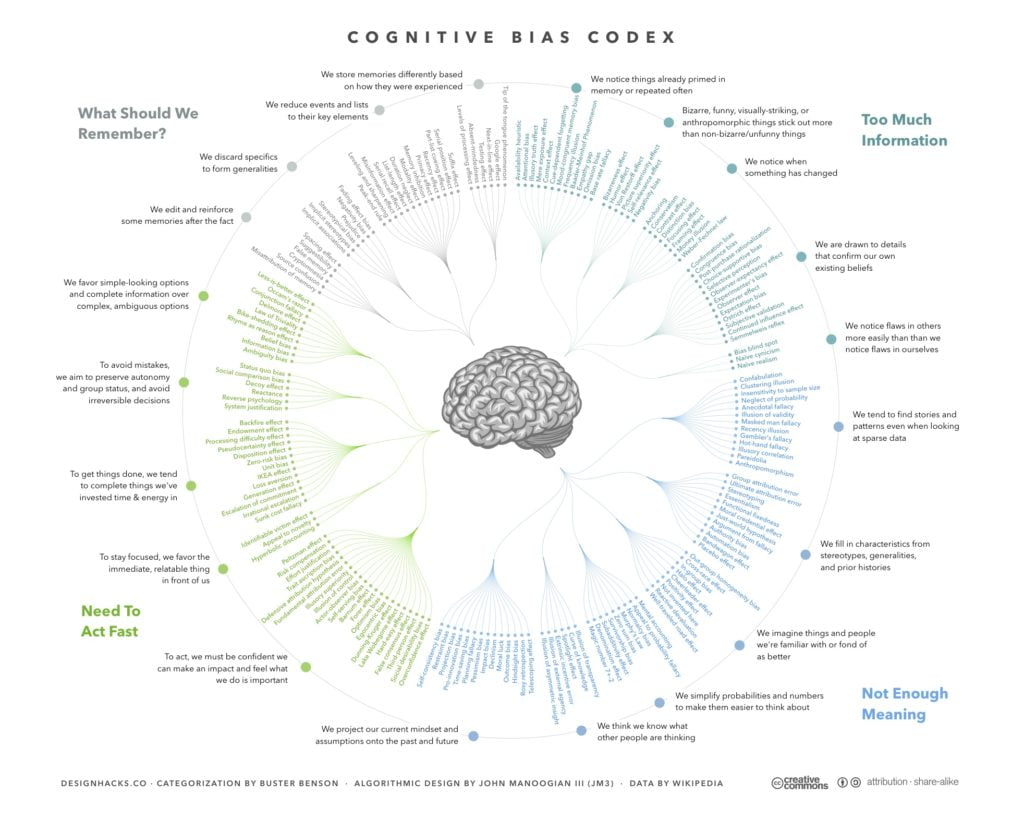 What can we do about ’em?

Humans are particularly susceptible to biases when we’re tired, stressed, or multitasking.

Short of eliminating those factors, I suggest you start simply with awareness like you would with any change program.

Read more if you dare…