It takes many different mindsets and behaviors to make a team hum. I am appreciating a view of collaborative behaviors – The Kantor Four Player Model – developed by David Kantor (as part of his work on Structural Dynamics), and am finding it useful as a way to hold up a mirror to a team that is interested in understanding and improving their communication.

You may have heard of Kantor’s four behavior models, or roles:

No one role of Kantor’s is “better than another.” In fact, all four roles are necessary for a team to operate with efficacy. Furthermore, folks may shift roles from moment to moment during the course of a single interaction.

It’s useful to know that people on a team often show up with one of the four as their default behavior – leveraging the strengths of that style, while blissfully unaware of its downsides. (Or perhaps just expressing the dark side.)  Low and behold, they are surprised by the conflicts and communication problems that result from their obliviousness of other people’s perception of them, or if another team member tries to take on the same role.

In this post, I offer an exercise that helps team members to:

All of this, when sustained, leads to better outcomes – for the team, the system they operate in, and ultimately the organization itself.

As mentioned above, people naturally behave differently in different situations, however, they often have a propensity towards a single way of “showing up,” one they are most comfortable with. Their “thing.” (See Immunity to Change.)

Having each team member identify their tendency towards one of the four roles as well as understanding the light and dark sides of that type of behavior can be powerful.

Expanding the field of view by having the team look at each individuals’ inclination and you might just help a team see why they habitually get stuck.

“You’ve got to know what your ‘thing’ is, and you’ve got to call it a ‘thing,’ whether it’s meanness, nastiness, un-forgiveness, arrogance, ego, resistance, rebelliousness or defiance. Everybody’s got a ‘thing,’ and once you call your ‘thing’ a ‘thing,’ we can give it a place to be or dismiss it.” – Iyanla Vanzant ℅ ACI

A View of the Roles of Kantor’s Four Player Model

I’ve assembled a view of Kantor’s four behavior models, recurring patterns of language, behavior, and conversational patterns. (Culled from a variety of sources… errors and omissions are my own doing…) 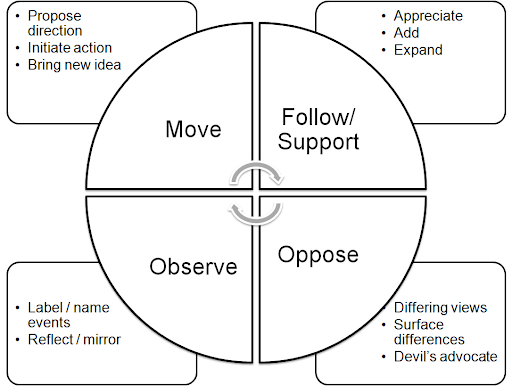 Circle up the wagons, and work through the following lines of inquiry:

This experiment might be the equivalent of buying a scale for folks who want to shed a few pounds: Useful only if they commit to a regular program of exercise.

Spend the balance of the debrief time helping the team to develop/refine agreements at both the individual (I) level, as well as the team (we) level.

Brainstorm and commit to candidates for action that, for example, will help the team:

As Simon from the Agile Coaching Institute wrote:

Working groups often have a certain quality or ’thing’ slowing them down, repeatedly interrupting their flow, stealing their energy. Coach your teams to see this as part of their collective so they can be conscious to it, name it, and ultimately choose what to do with it.  ~ Simon