Part 2: Digging through the soil to get to the roots 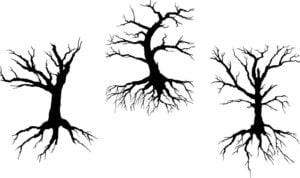 With a shared definition of the dimensions of silence and voice as well as an understanding of why silence is not golden [Part 1], let’s explore some of the organizational dynamics and leadership behaviors that cause employees to feel their opinions are not valued and result in disengaged or self-protective behaviors.

First, the coexistence of command & control with an agile transformation leads to a cognitive dissonance, where values, beliefs, leadership behaviors and principles conflict:

Next, formal hierarchies and high power distance indexes can dampen contributions from those with lower status where the structure is actively enforced, e.g., “Have your VP talk to my VP…”

Related to high power distance, are workers on H-1B visas. If a foreign worker in H-1B status is dismissed from the sponsoring employer, the worker must either apply for and be granted a change of status, find another employer, or leave the United States. Talk about incentives to “grin and bear it.”

A heavy reliance on contingent workers can lead to a view by management that a portion of the “resource pool” is especially self-interested and they are likely untrustworthy. [13] This is compounded when the emphasis is on the relationship as customer and vendor, instead of a true partnership. Without a true partnership, voice will not be able to flourish. Vendors / contractors will hesitate before making suggestions. They have a tendency to “protect their position,” to ensure their safety should things go wrong. [14] They will stand more on ceremony and avoid taking risks.

The pointy-haired manager syndrome. Managers also may have inherent and dysfunctional concepts such as believing that employees (not just the contractors/vendors) are by and large selfish and untrustworthy. Managers can be attached to the idea that only they understand the important problems in organization best, and that harmony, obedience and consistency are the embodiment of a healthy organization. As illustrated by Scott Adams’ comic strip Dilbert and a conversation about trust shared by Geoff Watts: A manager said, “People are lazy and you can’t trust lazy people with important decisions. If you give people autonomy over their own work, then they will just do the bare minimum. People need to be managed.” [15] Which should lead all of us to an interesting question: “Really? If that’s true, who’s been hiring these people?”

The only way to make a man trustworthy is to trust him. Henry Stimson Click To Tweet

Have you got more values, beliefs and practices that stymie the growth of healthy voice in your organization? I bet you do. Share them via comments.

The impact of leadership behaviors and styles on organizational silence

Managerial styles and personalities also get in the way of employees saying what they know. Disengagement or self-protection is used as a coping strategy by employees to deal with a lack of psychological safety. [16] Managers may contribute to the feeling of danger through:

How Big of a Problem is Organizational Silence?

Sadly, there’s evidence that the dominant choice within many organizations is for employees to withhold their opinions and concerns. A 1991 study showed that only 29 percent of first-level supervisors thought that their organization encouraged employees to express opinions openly. [18]

In another study from that same year, researchers interviewed employees from various organizations throughout the United States. The interviews revealed that more than 70 percent indicated that they felt afraid to speak up about issues or problems that they encountered at work. [19]

If you are not a fan of (somewhat dated) secondary research, you can generate your own data, if you dare. Some academic approaches can be found here:

There’s also a simple and direct retrospective survey on levels of team safety you can conduct. A single question: “How likely am I to bring forward my ideas about change?” Participants answer, anonymously:

5 = No problem, I’ll talk about anything;

4 = I’ll talk about almost anything; a few things might be hard;

3 = I’ll talk about some things, but others will be hard to say;

1 = I’ll smile, claim everything is great and agree with the managers.

Well, You Know, We All Want to Change the World

As a leader at any level, where to start if your organization is cursed by silence? First, ask yourself, “Am I ok with complacency and mediocrity?” If you are, why are you still reading? Get back to your cube…you must have PPT transitions to perfect. If you’re not, you’ve got a couple of options:

There was an article a while back in the Harvard Business Review (HBR) Why Employees are Afraid to Speak in which the authors’ findings suggest that encouraging prosocial speech isn’t “simply a matter of removing obvious barriers, such as a volatile leader or the threat of a summary dismissal (though that would help). …[it] requires deep cultural changes that alter how they understand the likely costs (personal and immediate) versus benefits (organizational and future) of speaking up.”

When dysfunctional silence is multi-modal in its causes, we need to address in a multi-modal manner.

Cultural Shifts at the Management Layer

Managers – listen to yourself and your peers. Do you often hear the following?

Pause for a moment and reflect. Do these words encourage speaking up or shutting down? Can you see how certain kinds of language destroy psychological safety, particularly those lower down the “chain of command”?

Look at things from a different angle. How would you like your organization to experience the following outcomes:

Yes, each and every one of those benefits go hand in hand with increased levels of prosocial voice. So why on earth would you want acquiescent or defensive behavior from the smart people you’ve hired?

Start with a change in leaders’ voice

Studies have shown that leaders who speak in collective terms, for example by frequently using the inclusive first-person plural (we, us, our) or by providing invitations and appreciations, are perceived as more open for input than those who do not. Think of the last time you asked any of the following questions:

Leaders, when you’re ready to take a greater risk: be brave, be humble, accept discomfort. Embrace the uncertainty that comes with ch-ch-changes as you move from #Boss to #EffectiveLeader. Add to your repertoire questions like:

Calm your amygdala down…  ask the question and then force yourself to reply with just the following phrase: ”Thank you for that feedback.” [20]

You can learn so much more from your mistakes than from your successes.

... taking risks is a muscle to be developed and used often - or it atrophies - @rebelsatwork Click To Tweet

Daily props and kudos help create a positive psychological environment. I’m not talking grand scale stuff here. Simple acknowledgments that are public. That have some hang time. There are a ton of tools that make this so easy:

Find something that fits in your org. Put it to use. Experiment. Create a culture hack.

Research suggests that when employees feel that they are viewed positively, they are more motivated to contribute to their organization which may lead to higher engagement and performance. [21]

Can it be that simple?

No, of course not. There’s much more to it, but the above is a great starting point for leadership behavior changes that will begin to increase the level of safety on a team. (You can read more on about psychological safety and the impact it has on team performance at Google’s re:Work site.)

Behind that shift in voice is a shift in values. There’s a better way to lead. [22]

In part 3/3, we take a look at what it takes to change the status quo from the team member level. Spoiler Alert: Lots of Courage, Resilience, and Vulnerability. Oh, and one more thing: Alliances.