How success can start with failure… 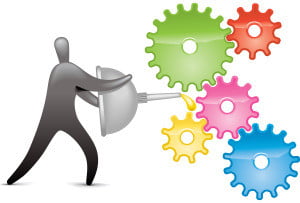 Opportunities for failure lurk everywhere. In projects, in code roll-outs, in team member interactions. We’re going to try a lot of new things. Some will work. Some won’t.  We don’t set out to fail, but when we do, how will we handle it?

When a mistake stares us in the face, will we:

We often find “failure” so upsetting that we miss out on the primary benefit of failing (yes, benefit): a chance to get over our egos, learn from the experience, and come back with a stronger, smarter approach.

This openness to looking for benefits in failure has produced many insights. Many of the things we do as standard practice weren’t always in place “since the beginning” – instead they came from looking at things through the lens of “how do we learn from this and iterate?”

In fact, the idea of retrospectives themselves emerged from “things not going right.” Back in the early days of Scrum there wasn’t a formal sprint retrospective at all. The prevailing wisdom at the time was that a good Scrum team should be always on the lookout for opportunities to improve; they should not defer opportunities to discuss improvements until the end of a sprint. That argument was a fairly good one. Good enough that the community was strongly opposed to making retrospectives a generally accepted Scrum practice – what Mike Cohn likes to call: a GASP. (Cohn’s definition of a GASP is not something every Scrum team “needs to do,” it’s just something every Scrum team needs to be aware of. They may reject doing it – hopefully for a good reason – but should not be ignorant of it.)

However, people observed that in-spite of what “should” be happening, what actually occurred on most Scrum teams was that day-to-day urgencies took precedence and opportunities to improve (i.e., failure.) often went either unnoticed or un-acted upon. So most teams eventually realized they should really set aside a dedicated time each sprint for doing so – and thus the retrospective became a standard part of Scrum practice.

An approach to retrospectives

What is a retrospective?

How we organize retrospectives

The general format of a retrospective can vary a bit based on team preferences, but usually we do it something like this:

The underlying theme is always the same though: “what can we do better next sprint?”

Teams can approach the columns in a variety of ways:

Variations on a theme….

It makes sense to explore a number of different retrospective exercises. Why? A couple of reasons:

The key here is that individuals must feel comfortable enough to share their problems, opinions and concerns and suggest different ways to approach the problem. So various means of doing so (group, individual, spoken, written) are often needed.

For more details on many of these variation, see Retrospective Exercises

A sprint retrospective is not only about how a single sprint team can do a better job during their next sprint, it has wider implications than that. Perhaps other product teams are having the same or similar issues. Our strategy for handling that is very simple. Not only is each team responsible for publishing a sprint retrospective report – we recently started synchronizing our sprint planning sessions, so at the outset each team gives brief “last sprint we learned” presentation.

Just as we “kick off” a project, we like to bookend things with a “close out,”  especially when we are developing a feature that will span more than a couple of sprints. We distribute a survey to all those involved with the project – stakeholders, product owner, design/ux and the dev/ops team. (We have a template in SurveyGizmo that we use as a starting point, and frequently iterate on it based on – you guessed it – retrospective feedback…)

The output of that survey provides background and often drives a great deal of the discussion during the close out retrospective meeting itself. We’ve been following the start/stop/continue approach, and just recently used (with great results) the 4L’s approach for a newly formed team. (Future post on that in the works…)

Our aim is to consider the overall project from a higher level than we do during a sprint retrospective:

Some specific lines of inquiry we explore at the close-out retrospective:

Postmortems are a special kind of retrospective – scheduled within 24 hours of an “incident.” The prime directive of our postmortems is:

“Regardless of what we discover, we must understand and truly believe that everyone does the best job he or she could, given what was known at the time, his or her skills and abilities, the resources available, and the situation at hand.” –Norm Kerth, Project Retrospectives: A Handbook for Team Reviews

Failure happens. This is a foregone conclusion when working with complex systems. We want to view failures with a perspective of learning. By investigating things in a way that focuses on the situational mechanisms, instrumentation, and the decision-making processes, we come out safer, stronger, and more resilient. At a postmortem, team members who were part of the incident give an account of:

… and all this happens without fear of punishment or retribution.  After all, the actions made sense to the person at the time they took it, because if it hadn’t made sense at the time, they wouldn’t have taken them in the first place.

We strive to remove any fear regarding “coming clean.” Nobody has reason to hide their mistakes or avoid talking about them. This creates an openness and the opportunity to learn from one another.

Or in the words of Henry Ford “Failure is only the opportunity to begin again, more intelligently.”

I recently discovered “Getting Value of of Agile Retrospectives” from Luis Gonçalves and Ben Linders and they sum things up nicely:

“In retrospectives you look for improvement actions within the agile team that team members do themselves. Teams are self-organizing which means that they have the power to change the way they work (their process). If they want to try a different way of working, it’s up to them to give feedback to each other, to discuss what happened, to learn, and to decide what to do…

In the retrospective, the team defines the actions that they want to perform in the next iteration to overcome issues that they ran into during their last iteration, to work more efficiently and effectively, and to deliver more business value to their customers. Nobody can effectively change a self-organizing team but the team itself!

Retrospectives empower the team to control their own destiny.”